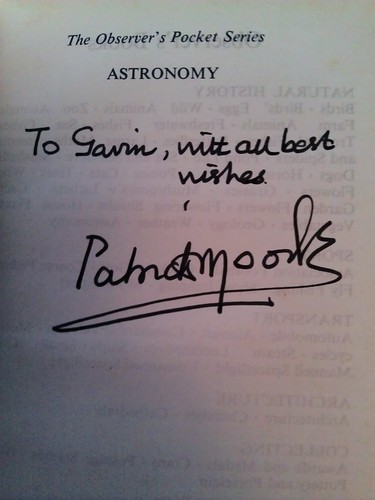 Very few public figures have influenced me over the years – Patrick Moore was an exception.

As a friend of my aunt, he wrote to me when I was 8, sending letters and copies of his books. Being on Arran, the skies were dark, and even the Milky Way visible on a clear night.

Fast-forward another 10, and I’m working at an early start-up, Virgin Net, where one evening we held an “webchat” with Sir Patrick. We then went for dinner.

Fast-forward another 10, and I’m in discussion with Sky at Night magazine about writing a feature, and separately with Chris Lintott on related projects.

I know his enthusiasm for Astronomy was felt by many of my peers.

Thank you. Goodnight, and RIP.

And now, go outside and look at the stars.